Make your own progress (feature suggestion)

first off, as an optional option

background why this would be a useful option

I fully understand that the ‘official lists’ is kind of a selling point for the site,
but there are those of us, atleast myself, with little to no intrest in those lists.

However i feel that this is missing out on a major part of the site, what if i could have this option with my own / other custom lists that have movies in them that I find intresting(!?)

Apologies if I misunderstood your suggestion but there is an ICM Enhanced widget you can add to the site that gives lists like the attached screenshot. The top lists are obviously unofficial ones. 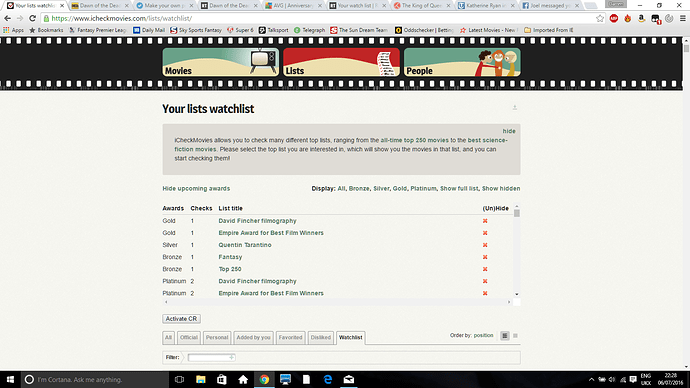 As spireitedaz points out, there is a userscript called “ICM Enhanced” developed by iCM users bobbybrown and themagician that not only creates a progress overview for personal lists, but has a lot of other little tweaks and enhancements. It’s very flexible and you can more or less turn any feature on or off as you please. You can find it here on the unofficial forum: http://s15.zetaboards.com/iCheckMovies/topic/7042932/1/

Latest version is 1.8. In Chrome/Chromium you’ll need the extension “Tampermonkey” installed first and in Firefox you’ll need the extension “Greasemonkey” installed first. Always be careful when installing userscripts, they can contain malicious code, but this one is trustworthy, I’ve used it for years and so have dozens (if not hundreds) of other iCM users.

The script doesn’t create a visual progress bar like iCM has it, but has a few options for how to display the required checks for the various awards (irrespective of official status). I hope this helps.

what i’m asking for is for this page ( https://www.icheckmovies.com/profiles/progress/ ) to be customizeable - as an option to the official lists, there’s could even be just a toggle between official / custom lists.

from a programmer point of view this should be easy to implement with a few tweaks as structure of the feature already exists - just needs some usersettings. For example there could be a tab called ‘Custom’ (placed where the All, IMDB, Critics … and so on tabs are) and in this view there could just be an ‘add list’ where you add lists to your custom progress

While the above suggestions are in a way similiar, from my point of view i still miss out on the progress feature on the site (as mentioned above, i follow none of the official lists).

I would also love to look up a movie’s info page and see if it’s on any of the lists I’ve favorited as well as what official lists it’s on.

Otherwise, favoriting a list doesn’t have much of a point.

I would also love to look up a movie’s info page and see if it’s on any of the lists I’ve favorited as well as what official lists it’s on.

Otherwise, favoriting a list doesn’t have much of a point.

This is actually a nice suggestion!

In a future version, the watchlist option will change to a ‘follow this list’ option. If you follow a list, you’ll get a notification if a list has been updated for example. It makes sense to include those in a separate tab on the ‘in lists’ page of the movie. I’ll add this suggestion to our ‘Future’ milestone